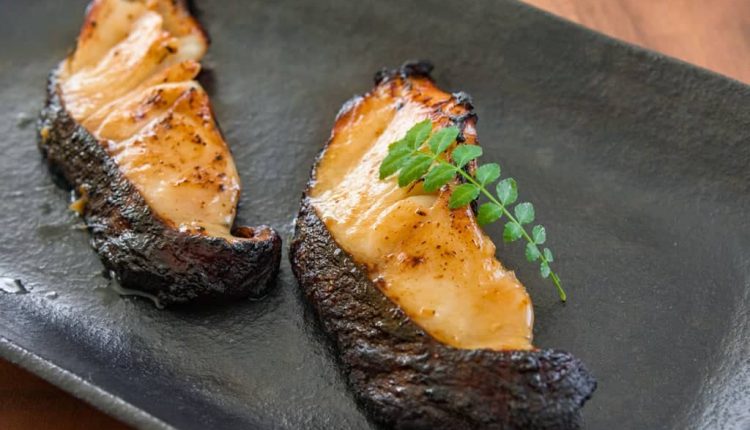 How to Cook Sablefish steak aka Black Cod

Sablefish is best known as “smoked sable” in New York delis or “smoked black cod” in the Pacific Northwest. In California, it is known most often as “butterfish.” The reason is simple: Few fish are as silky rich in omega-3 fats as the sablefish or black cod

Don’t Judge a Fish by Its Skin Color

This deep-dwelling predator is one of only two fish in its genus. The other is the skilfish. Sablefish, or black cod, live on the ocean floor and have been found at depths of more than a mile below the surface. The skin of a sablefish steak

is charcoal gray, and the fish itself doesn’t look like much, but this fish is like a diamond ring in a plain brown wrapper

Sablefish live only in the Northern Pacific, and most are caught in the Bering Sea. Thankfully, they are abundant and because sablefish’s taste and appearance—if not texture—are similar to Chilean sea bass, sable is an environmentally superior choice to sea bass, which is threatened in some fisheries

In the kitchen, sablefish, or black cod, if you prefer, offers a striking yin-yang appearance—creamy white flesh juxtaposed against black skin

Sable is versatile, and its high-fat content makes it forgiving to the novice cook because the fat acts as a buffer against overcooking. Its fat content also makes it a prime candidate for smoking

Beware, this fish has large pin bones, which are curved little bones that run along the fish’s centerline. They need to be removed before you go any further with your preparation. Do this with a pair of needle-nosed pliers

Sablefish Shines in Preparations and Recipes

As Sushi or Crudo: Do you like the fatty toro tuna or salmon belly at sushi restaurants? Then you will love sablefish raw. It is also luxurious dressed at the table with a splash of Meyer lemon and sea salt. Don’t use sablefish for ceviche, however; that dish goes best with lean fish

On the Grill: Again, the fat is a savior here. It lets you slap a sable fillet on a hot grill without worrying too much about it turning into fish jerky if you look away for too long. But its fine texture means you should use a cage or at least have the grill well oiled

Pan-Roasted: Just a simple saute lets you savor the depth of sablefish, which offers a richer mouthfeel and longer finish than a lean fish does

Confit: Poach sablefish slowly in olive or some other kind of oil. Think you like slow, oil-poached tuna? Then you will love the same treatment with sablefish

The Whole Foods in my neighborhood has been carrying it with regularity. Here is a beautifully simple way to prepare it, taught to me by my friend and avid fisherman Hank Shaw.

The fillets are simmered in a Japanese-style broth of sake, soy sauce, rice vinegar, oil, and ginger. While the fillets are cooking, you spoon the simmering sauce over the top of the fillets so that the top gets infused with the sauce as well. The fillets are then topped with toasted sesame seeds and thinly sliced green onions.

Hank brines his fillets first, to firm up the flesh before cooking. I could go either way with this. If you have time, brine the fish (instructions are in the notes to the recipe), if not, just be more careful with handling the cooked fish, as it is rather delicate

Get Fresh Chicken Supplier in Singapore for an Affordable Price

Plan Your Next Visit And Enjoy Dinner In Orlando

How To Make Authentic East Coast Pizza In Mesa